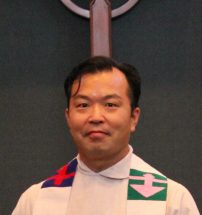 As associate pastor for the Federated Church, I look forward to hearing your life stories. In the meantime, it might help for me to share mine.

Although I do not remember the experience, I was told by my parents that my birthplace was Seoul, South Korea. The earliest memory I have of Korea is living in Busan. My father enlisted in the U.S. Army and we lived a short distance outside the base. My earliest education was in the American preschool on base. When I was six, my mom, younger brother and I flew to the U.S. (with my dad joining us a few months later).

We settled in Los Angeles. My parents did various things to make a living: sew in a garment factory, run a small diner, operate a dry cleaner, and work in a machining factory. My brother and I learned to take care of ourselves: walking to and from school, preparing meals, doing homework and making a big mess of our home.

When I was in second grade, my parents thought it might be a good idea for our family to start going to church. They felt that church could help my brother and me from getting into trouble. We went to many different Korean immigrant churches. Generally, I did not like going to church. I did not understand the Korean speakers nor did I enjoy the activities.

Jumping ahead to high school, I still did not like going to church. I also struggled with finding purpose in life. But one night in the summer before my senior year, a close friend challenged me to give Christianity a chance. From then I listened more carefully to the sermons and even sang along during worship. In October of my senior year, I went with my parents to a new church. After the youth worship, a deacon shared with me the Four Spiritual Laws. He concluded with an invitation to accept Christ. I’m not sure why, but it felt right to say “yes.” That day, I accept Christ as my Lord and Savior.

Several months later, I found out that I was accepted to the University of California at Los Angeles (UCLA). Thinking that God was leading me toward medical mission work, I majored in biochemistry (I also liked organic chemistry). But after spending a summer and a year after undergrad as an assistant to a medical missionary, it felt like God was leading in another direction. So I went to seminary to get trained as a professor. I attended a school close to my parents’ home. During that time, I served as a youth pastor at a large Korean American church. I had plans to continue my studies in Canada, but God postponed that. Providentially, I met my wife, Sunnie, during that time. We got married in Korea and moved to Canada as newlyweds. While in Vancouver, I pursued an advanced master’s degree in Christianity and the Arts. And our first son was born there.

For my doctoral studies, my family moved back to southern California. I started the PhD program in Theology and Culture and returned to the large Korean American church to serve again as youth pastor. But after several years, I realized that combining fulltime studies and fulltime ministry was not conducive for either. I stepped down from ministry to focus on academics. Soon after, my wife and I had our second and third sons. Additional reason for stepping down from youth ministry was so that I could work with older, college-aged young adults. Interestingly, God led me to serve as a children’s ministry pastor. And I was able to (finally!) finish my PhD with a dissertation on “Sanctifying Space: A Reformed Theology of Places for Corporate Worship.”

I am excited to serve as the Associate Pastor for Children, Youth and Families at the Federated Church. My hope is that many fond memories will be formed in the people that God leads me to serve.

Look forward to growing together in Christ,
Edward

Teaching Experience:
• Adjunct Professor in the School of Theology of Fuller Theological Seminary in Pasadena, CA, 2012-present, teaching primarily for “Theology, Worship & Art” online.
• Associate Director of the Institute for the Study of Asian American Christianity in Los Angeles, CA, 2010-2016.
• Teaching Assistant for Dr. William Dyrness at Fuller Theological Seminary in Pasadena, CA, 2005-2013.
• Senior Docent at the Vancouver Art Gallery in Vancouver, BC, 2002-2004.